The power of speech–not only for the student but the teacher also. The things I learn about my kids and the connections I make are priceless…. 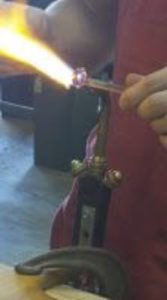 I didn’t have much hope for him.

In my head I thought, He’s probably not going to do much. He’ll probably barely get by.

At least I didn’t let the voice in my head come out of my mouth.

Because that voice was wrong.  Really wrong. I am ashamed of myself for even letting that little voice whisper.

This is a great kid with passions most people in the school don’t know about. Well, now they do. Because I’ve been sharing part of his story with everyone since last Tuesday.

This year, as the class was talking about possible topics, H mentioned that he works with glass–makes necklaces and knick knacks. Really?  I thought. He was so excited about sharing this and his excitement was contagious. Kids kept asking him about it. He brought in some pieces he had made. So we figured out a way for H to bring in his equipment.

He got permission from the principal and the Industrial Tech teacher to bring his torch and propane to the shop and set up in there. Now this was scary for two reasons. A. The principal–what kid wants to voluntarily go there? B. The Industrial Tech teacher is also the head football coach. He’s loud and intimidating. But H did it. And they both agreed. 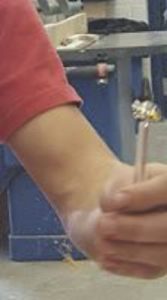 On speech day he was really supposed to be finishing up some standardized testing, but I pushed that back a day. He was ready and excited and I wasn’t going to crush his enthusiasm.  The whole class followed him down to the shop where he had his equipment set up.

He started in. We recorded his speech on an iPad, so I could just rewatch if I needed to.

I can’t begin to describe how proud I was or explain the tears that threatened to fall. He held his audience in the palm of his hand. And that audience gained a new respect for him. The Industrial Tech teacher stood and watched with just the hint of a smile on his face. I think he learned a little bit more about the kid too 🙂

During inservice, I wrote him a little note about how proud I was of him and stuck it in his locker to find the next morning.  To quote him, “Thanks for the note Mrs. Day. It made my day.”

The power of relationship building–not only for the student but the teacher also.