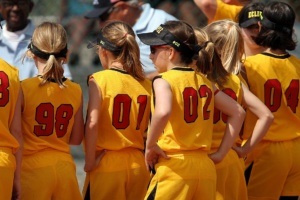 I chanted my rally cry from my softball years and nobody got it. I might be a little bit of a unicorn in the English Teacher world as a jock/musician/book/writing nerd, but “whatev.”

Today’s host, Nikki Smith from Urbandale High School, shared a poem by Taylor Mali called “What Teachers Make” to inspire us to rally.

It’s May. It’s “that time of year” (if you’re a teacher, you know what that means). So, the prompt today was “rallying.”

Here’s what I wrote:

It’s the end of the year. I was sorta hoping it would be the start of something new in my career, but it wasn’t. I have been told “no” by the universe more times than I have ever been told “no” in my life. Or maybe that’s not accurate. I don’t know. Let me be negative for a minute.

No, you can’t have normal parents.

No, you can’t be just a child.

This is the part in the meeting where a spider crawled up to our table and I lost my train of thought while writing. Then Liz, one of our more “connected with the universe” (I say this with love) members (she is so unapologetically herself and it’s awesome) paused to consider the symbolism of the spider walking up to her while writing (apparently, this is not the first time this has happened to her) and found the following:

“The spider, because of its characteristics, has come to be associated with magic and the energy of creation. It is a symbol of creative power, reflected in its ability to spin a silken web. It is also associated with keeping feminine energies of creation alive and strong…

If a Spider is a guide in your life, ask yourself some important questions. Are you weaving your dreams and imaginings into reality? Are you using your creative opportunities? Are you feeling closed in or stuck, as if in a web? Do you need to pay attention to your balance and where you are walking in life? Are others out of balance around you? Do you need to write?…

Remember that the Spider is the keeper of knowledge and of primordial alphabet. The Spider can teach how to use the written language and power and creativity so that your words weave a web around those who would read them.”

After we “took care” of the spider, I tried to continue on with my list of negativity, but I couldn’t. I think it’s because there wasn’t much more than that growing up. I know that there is stuff I should/could be mad about maybe, but I’m just not. I’m very thankful. I’ve actually had a lot of yeses during times I probably should have been told no. Maybe that’s why I’m struggling right now with all the rejections:

No – you can’t have children.

No – you can’t advance in your career.

I’m just so defeated. And I don’t feel hopeful. Not right now.

Yeah. I just don’t feel it.

One of my mentors told me yesterday during a conversation about another professional life rejection that I need to “feel it in my heart” when it comes to figuring out what I want to do in life.

The thing is…I thought I did! Or maybe I made myself to?

When I say my special prayer at night and wait for the “warm feeling” in my chest – is that what I’m supposed to be waiting to feel?

“Maybe the universe is trying to push you in another direction,” she said.

I did hear a voice once.

(This is super embarrassing and I’ll probably be judged and made fun of but I’m going to go ahead and share anyway because – what the hey?)

We were living in Texas and it’s really hot there so maybe it was the heat messing with my head. But I woke up in the middle of the night to a deep booming man voice that said matter of factly: “You will change the face of education.”

For real real?
Me?

It kept me up the rest of the night though because it was so loud and it totally freaked me out.

I realize this sounds crazy. But…I don’t know. Why in the world would I wake up to some mysterious booming deep man voice saying that? How would that even happen anyway? How am I supposed to do that when all the gatekeepers and the universe keep turning me away?

Maybe that’s all this is.

I haven’t necessarily lost anything except a turn at bat. I can still make something happen. Just because there are two outs doesn’t mean our turn is over. Home runs can still happen. I’m still in the game. I’m just down and need to rally.

If sports taught me anything, it’s that sometimes it’s not that you didn’t prepare enough or that you weren’t good enough. The other team just got more hits than you did. They were good too. I never felt bad when we played a good team and lost. It was losing to a bad team that felt like hell. Maybe that’s why all the rejection feels so terrible. I feel like I keep losing against mostly bad teams.

In a frank conversation with my husband last night, I asked him, “What do you think I’m doing wrong?”

“You’re trying to go too big too fast I think,” he said.  “Not that you shouldn’t go big (because you definitely should), but maybe step back a minute and take some smaller steps to where you want to go.”

Then the spider this morning was way weird.

Are you using your creative opportunities?

Are you feeling closed in or stuck, as if in a web?

Do you need to pay attention to your balance and where you are walking in life?

Are others out of balance around you?

Do you need to write?

Maybe right now, writing this, is the start of my rally.

I spent last night feeling bad about another big “no” the world sent my way, but after writing this morning and talking with my Teacher Writer peeps, I’m slowly feeling the hope creep back in.

Jolee Donnelly teaches in Urbandale and coordinates the Teacher Writers of Iowa Group in Des Moines. If you are interested in joining the group, check out  https://teacherwritersofiowa.com/ for more info!