First Days: Capitalizing on the Start of School 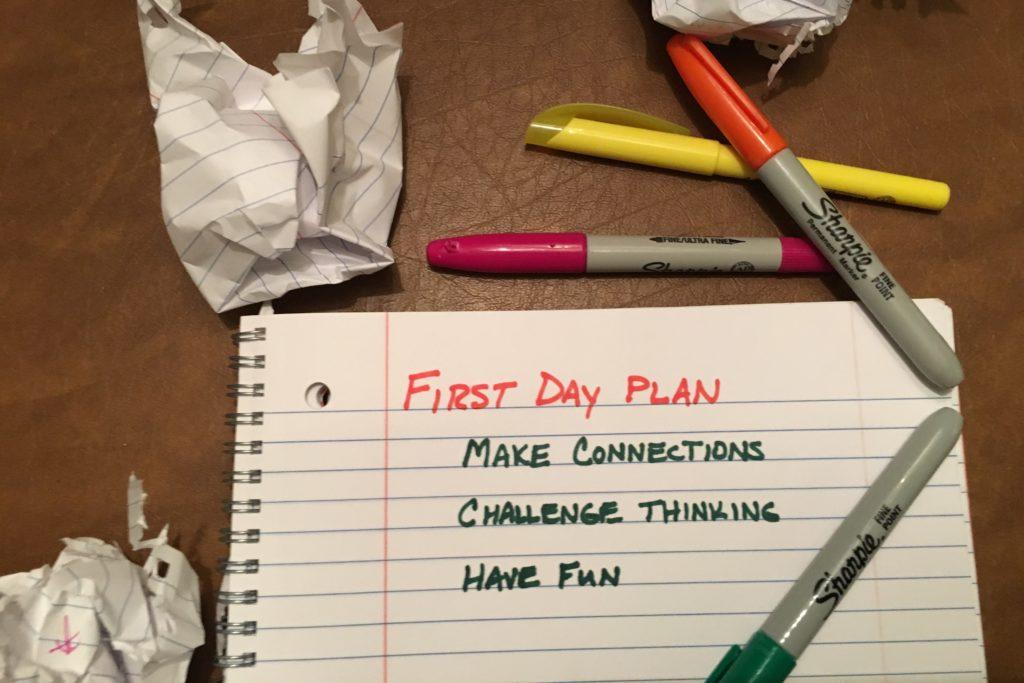 Several years ago, I began thinking more intentionally about the first day with students. I used to begin with introductions or ice breakers (which largely fell flat, especially near the end of the day) and we covered the syllabus. By the end of the day, I was exhausted.  My voice was loudest in the room. Little went wrong, but it didn’t feel like we accomplished much. There was no rush, no buzz, no energy. Let’s be honest, after the 168th introduction of the day, I’d forgotten what I’d learned about students 14 through 132.

We started with name tents that prompted students to provide various pieces of  information. They wrote their first names (as they’d like to be called) and created acrostics with words that either describe or connect to them. Markers were distributed among the tables. I like this activity for a number of reasons. It allows for observation.  Who works quietly and who likes to chat?  I learn about creativity and expression in a low-stakes scenario. Some are content with a pencil, others create vibrant and artistic designs. I can gauge student comfort and skill with word choice.  Who asks if he can use his phone for word ideas? Who effortlessly pulls top-shelf descriptors? Who has difficulty describing herself at all?

As students completed this first step, I circulated and took attendance. This is the most valuable element of the activity — each student told me his/her name in his/her own voice. I spared all parties the humiliation of slaughtering a name. They were given the opportunity to state what they want to be called. In previous years, I’d often I’d ask a student about his/her preferred name — Sam or Samantha, for example — and I get a response that either is fine. Certainly students have a preference. When asked to write it, they take ownership over it — the one they prefer — even if they don’t consciously think about it.

But what’s most powerful is that such a simple activity informed me that three of my students are transgender, something the roster would not have communicated. Rather than putting the student in the awkward position of trying to explain himself/herself, I authentically learned something about each student’s identity and quietly asked about preferred pronoun. In that way, I communicated that I want all students to feel safe and at ease, which is deeply important to me. It wasn’t just a bullet point on the syllabus, they experienced it.

With name tents before them, I set them loose on the first reading of the semester — one that sets the stage for all we’ll do.  We read a non-standard short story, “Ordeal by Cheque” by Wuther Crue. The story takes place over the span of 32 years — 1903 to 1931— and is told entirely in checks. We were able to talk about character, plot, conflict, and setting. We discussed inferences and the importance of supporting them with evidence. We considered the American values this brief text espouses. Students engaged in close reading with their classmates. They used the table tents to refer to one another by name. They leaned together as they pieced the story together and traced its development. The room buzzed with engagement; there were palpable swells of excitement as the pieces fell into place. And when Tony Spagoni entered the scene, they eagerly batted ideas about his villainy. They were hooked.

At one point in the day, a boy grinned at me and said, “This is hard! I like it!”  The room reverberated with a sense of surprise when the bell announced class was already over. As they spilled into the hallway, the story went with them. Groups of kids still huddled together; they still chewed on it.

This is my favorite kind of first day. Every student spoke. Every student was engaged. Every student read closely and collaboratively with their peers to draw conclusions. We worked hard. We had fun. I strived to create a first day that allowed students to experience what I value in the classroom: relationships, thinking, voice, inclusion, close reading, respect, engagement, surprise, grappling with complex ideas, fun.

Gone are the days when I danced gingerly around the edge with introductions and syllabi. Instead, I begin on the day students are most ready and most willing to plunge, to swim, to play. And they do. They do.

Haley Moehlis teaches 10-12 English at Valley High School in West Des Moines. She serves as the president elect of the Iowa Council of Teachers of English.