Pulling Up the Roots by Mark Schillerstrom 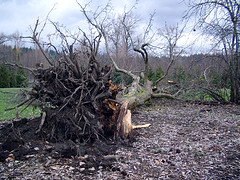 Nearly 30 years ago, I had the opportunity to hear Donald Graves speak at the Iowa Writing Project’s Fall conference. One of the topics he addressed was assessment. In those days, the drum beat for incessant assessment was just beginning, and today as it is reaching a crescendo, I remembered an analogy that Graves used as he discussed it.

When we raise plants, he explained, we operate with a certain faith that, given the right mix of light, water, and soil nutrients, the plant will grow. So, we let the plants grow. We do not, Graves continued, rip the plant out of its soil to examine the roots. That would kill the plant. Doing it every day would kill it faster. Yet, in a sense, he concluded, too much assessment can have the same result on students. We need to give students time to grow.

It seems that as new models of instruction are filtering into the classrooms across the state, we may be pulling our plants up by the roots in order to develop corrective instruction for the following day. Everyone must learn—NOW! I don’t know that the classroom teacher has much latitude in tempering administrative directives for this daily assessment of and correction for learning, but we can and should look for ways to identify and recognize growth over time.

This past year, I tried an experiment with my sophomore classes that allowed the plants to grow, that clearly showed demonstrated their gains over the past nine months.

The process was incredibly simple: during the first two weeks of school, I assigned students to write an analysis essay over a short text. Then, at the end of the school year, I reassigned the same task (some students selected an alternate text) and asked students to compare their two works. Nearly every student demonstrated growth/improvement/learning.

Here is what I did:

Step 1: We viewed a short, animated fable called “Joshua in a Box” which can be watched on YouTube. As a group and individually, we did some work on possible interpretation and meanings, but no definitive “answer” to the meaning of the film was determined.

Step 2: Students were asked to write an essay explaining what “Joshua in a Box” means. Students were to assume that the essay reader had seen the film so there was no need for an extensive summary of the film, but the essay needed to go beyond a summary.

Step 3: The papers were collected and put away.

Step 4: The course proceeded. At Johnston, as everywhere else in the nation, we are working to implement the Common Core Standards. Our Sophomore English course focuses on reading, writing, and speaking skills; analysis of literature (fiction and nonfiction), film (fiction and nonfiction) and visual imagery; and comparative analysis of two or more works, along with the typical “English” class expectations.

Step 5: At the end of the second semester, students were re-issued the “Joshua” assignment. They were asked NOT to go back to their original August essay until they were done with the May. (I have no reason to believe that any of the students violated this request, although human nature would suggest that some did.) Some students had been so frustrated by “Joshua” in August that I located an alternate animated short to use, also from YouTube. But the film did not really matter.

Step 6: Students worked on their essays, did their comparisons, and turned in their work. I was available to students for conferencing, giving feedback intended to help them think their way through their essay, encourage, or re-direct, but I did not tell them what to think, what to write, or how to write it. (It was interesting to note that many of the student’s questions regarding their work had shifted away from “August” questions (What do I have to do to get an A? Is this good enough? to “May” questions (Is it okay to . . . ? I don’t think my opening . . . would you look at it?). There are still too many students who refuse to seek guidance or feedback as they move from a first draft into revision, and I am not certain why that is . . . ).

There was one skewing factor. We had just finished a short unit on analyzing documentary films. As students began to think about their interpretations/explanations of “Joshua in a Box,” many asked if they could use the terms “visual track” and “audio track” in their papers. So, these tools, fresh in the student’s mind, found immediate application in this assignment. However, this also seems to expose a deeper issue: students were asking me if it was okay to use what they had learned in a different unit to fulfill the assignment in this unit. Of course I wanted students to transfer from one unit to the next and from one course to the next and from one year to the next! My students seemed to think that to transfer or apply what is learned in one place to another might not be appropriate.

Attached are selected samples from a range of student abilities. (I apologize for the formatting, but some of these files are only available to me in PDF format.)

(Read Pulling up the Roots Essays)